Rising EMBA Applications Point to a Bright Future for the Degree

Considering the latest surge in interest in the EMBA, its best years may be yet to come.

If the current state of EMBA applications is anything to go by, the postgraduate degree is as healthy as ever as more and more experienced business professionals recognise its value in helping them stay ahead of the pack in a fast-changing business world.

Launched in the US in 1943 by Chicago Booth, the Executive MBA has since established itself globally as the go-to educational option for organisations and executives who want to transform themselves in an increasingly competitive market. As of end-2018, more than 260 institutions offered EMBA programmes, according to the Association to Advance Collegiate Schools of Business (AACSB).

While the traditional MBA degree has fallen on hard times in the US, the EMBA is going strong. About 67% of business schools globally reported demand for EMBAs was either stable or growing in 2018, according to a survey by the Graduate Management Admissions Council (GMAC). In addition, the Executive MBA Council (EMBAC) announced that applications to EMBA programmes have climbed 32% since 2015.

In line with the ongoing push for greater female representation in company boardrooms, the report offered encouraging signs that the trend of closing the gender gap in executive education is continuing, with the percentage of enrolled female students rising to 31.2% in 2019 from 27.6% in 2015. 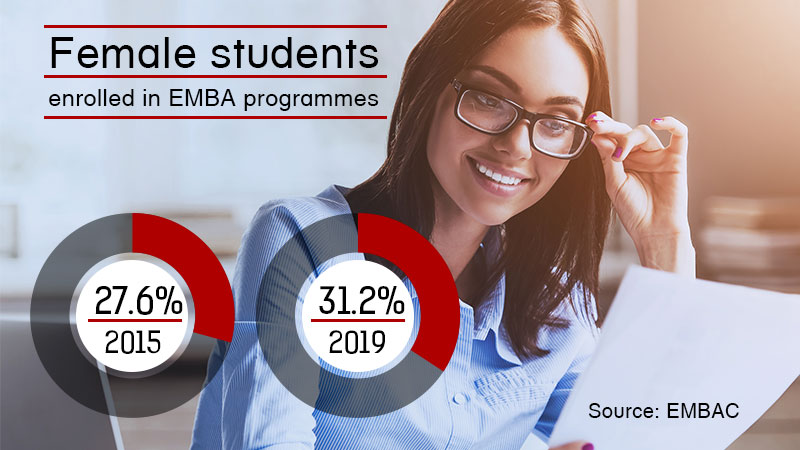 To the unenlightened, the practice of successful business leaders returning to school probably makes little sense, if any. But a closer inspection lays bare the benefits associated with the degree. One of its main selling points is its ability to close gaps on fundamental business skills, creating rounded-out professionals well versed in the essential practices of business. EMBA participants also come to understand that leadership in business involves much more than managing others; it also involves the ability to be flexible and change your leadership style in accordance with the circumstances. Another feature highly valued by managers and executives enrolled in EMBA programmes is the chance to build a powerful network and have their assumptions and perspectives challenged by classmates and professors.

Read: 3 Reasons to Get an Executive MBA

Many graduates testify that they were able to fine-tune their leadership style while also having a positive impact on those around them. Julie Thiessen, EMBA 2015 from Olin Business School (Canada) and vice president, Business Enablement at US logistics company Prologis, says: “What the programme has taught me about leadership has been eye-opening. Now, I’m less sledgehammer and more scalpel. Instead of running ahead and pulling employees along, I coach them to be the best they can be. I ask them: ‘What do you need?’”

The EMBA is a long-term investment that offers returns long after graduation. Rolf Friedli enrolled in Chicago Booth’s first EMBA programme run out of its European campus in 1994. At the time, he hoped to learn about an increasingly globalised business world and improve his leadership and strategy development skills. Friedli told the Financial Times that now, a quarter of a century later, his EMBA is still a source of prestige and “a badge of honour”.

Staying ahead of the curve

Many people decide to do an EMBA to keep abreast of the latest trends in business. Don Skeoch, chief marketing officer of Los Angeles Tourism & Convention Board, is one of them. He obtained an MBA from UCLA’s Anderson School of Management (US) in 1989, but felt that business practices had changed considerably since then with the emergence of new media and technology. That is why in 2004 he chose to do an EMBA at the Wharton School of the University of Pennsylvania (US). 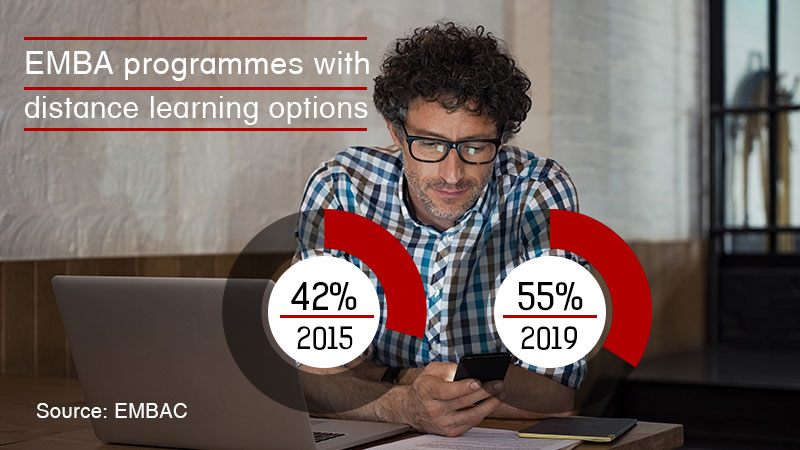 Professor Kar Yan Tam, dean and founding member of the HKUST Business School, believes that the Executive MBA programme is essential for business people who want to stay one step ahead of the competition. “Today’s EMBA students need to constantly review their skills to meet the evolving needs of their businesses and challenges ahead. Amid disruptive technologies, they must learn about the new stream of possibilities offered by, for example, fintech and business analytics, to leverage future opportunities.”

Indeed, EMBA programmes are attracting more and more people with technology, engineering, and science backgrounds, according to GMAC data. An EMBA is very useful to technology entrepreneurs, Sangeet Chowfla, CEO of GMAC, told the Financial Times. “They find that the skills they have from a management perspective helps them to scale up their businesses.”

But technological development is also changing the way EMBA programmes function. Thanks to advances in communication technology, it is now possible to conduct some parts of the programme online, for example fact-based learning, thus dedicating more time on campus to debate and discussion.

Read: Majority of EMBA Graduates Say Degree Is Worth It

The degree has been around for many years, enabling business professionals to move to another level, both professionally and personally. And considering the latest surge in interest in the EMBA, its best years may be yet to come.

3 Reasons to Get an Executive MBA

Your Career Progression with an Executive MBA